Designer doughnut venues are popping up all around the globe. But, in my opinion, it’s hard to beat these traditional jam and cinnamon doughnuts. Maybe it’s because they take me back to the times when my friends and I would spend our precious pocket money to buy these jammy treats from the roadside van. I can recall the jam being so hot that we had to eat them carefully, so that we wouldn’t scald the roof of our mouths.

This recipe is best made as ring doughnuts, or small bitesize doughnuts. This allows for even cooking, all the way to the centre of the doughnut.

We recommend using rice bran oil for several reasons. Firstly, it has a high smoking point, and so is less likely to burn (so its a bit healthier). It also has a light flavour and fine texture which does not penetrate the dough easily. Lastly, it contains vitamins, antioxidants, and is trans fat free. (It almost justifies making them more often lol)

I like to use a seedless raspberry jam filling. If you can’t find any at your local store, just pass some regular jam through a sieve. Of course, you can be totally flagrant and fill them with nutella or custard instead.

Approx 1/2 cup raspberry jam (or any other seedless jam)

Warm the milk and butter until lukewarm. Do not overheat, as this will kill the yeast (resulting in golf balls instead of doughnuts). Mix in the egg. 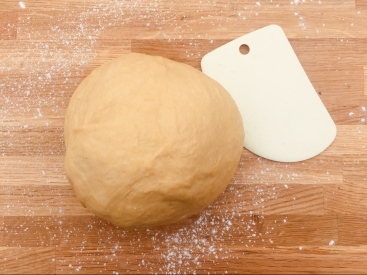 Place the flour, salt, caster sugar and yeast in a bowl. Add the milk mixture. Knead until you have achieved a smooth dough (about 10 minutes by hand, or 7 minutes on slow speed in a mixer).

Cover with a damp tea towel and leave to rise for approximately 1.5 hours, or until it has doubled in volume.

Place the dough onto a lightly floured surface and roll out with a rolling pin, so that it’s about 1.5 to 2cm high. If you are making ring doughnuts, use a 7cm cutter to make the rounds, and a 3.5 to 4cm cutter to cut out the centre of the doughnut. If you are making mini doughnuts, use a 3.5cm cutter. Cut out the doughnuts and place them on a floured surface, leaving 2cm between each one. 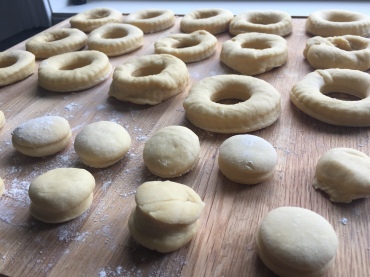 Roll any remaining dough into a ball and repeat the process until all of the dough has been used up. Cover with the tea towel and leave to rise for 30 minutes.

Heat the oil in a deep fryer or pot on low to medium heat.

While the oil is heating up, prepare your sugar coating and filling. I like to spoon my seedless jam into a sauce bottle. I then place it in a cup of hot water to make it runny, so that it’s easier to squeeze out of the bottle.

Cook the remaining doughnuts, a few at a time. As you take them out of the pot, immediately roll them in granulated sugar (if using). “Inject” them with jam and eat ’em while they’re hot!!!